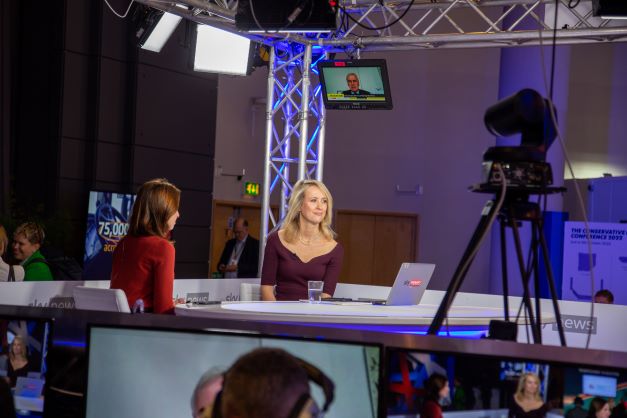 The ICC Birmingham technical and production teams have delivered their first fully-hybrid Conservative Party Conference in 2022, with over 300 events in the venue streamed to audiences online.

As part of a busy fringe event programme, 456 fringes were hosted in-venue alongside key sessions with ministers and MPs, as well as broadcast requirements.

“In terms of the technical capability, this has been our busiest conference to date. We brought in extra fibre optic cables to support the huge streaming provision required for the event, which runs over four days. We are managing multiple events which require streaming and broadcast abilities, as well as cable support to the media hub,” said Ben Prior, Head of Technical Production.

“It’s interesting to see how times have changed, with traditional print-based media requiring video and audio solutions to service their online presence as well as streaming capabilities.

“As a team, we’ve worked round the clock to deliver a comprehensive service across the event programme.”

The ICC has invested in infrastructure upgrades to allow Internet Protocol and Network Device Interface video, which make HD video creation and sharing accessible internally and externally to the venue.

The technician training programme now in place at the ICC Birmingham has a focus on hosting hybrid and virtual events.

“A key element for our technical and production teams is to link in with external contractors and production agencies as part of our conventions,” said Allan Boyle, Conventions General Manager, NEC Group.

“We’re launching a new role, Conference Technician, which allows us to amplify and develop the skills that are now required for the technical teams as part of our in-venue event services.”

The ICC Birmingham has hosted several live-streamed events this year, including the inaugural Commonwealth Esports Championships and Commonwealth Esports Forum and Jisc, a UK higher, further education and skills sectors’ not-for-profit organisation for digital services and solutions. The ICC also hosted the Organisation for Security and Co-operation in Europe Parliamentary Assembly, which was streamed out globally in 6 different languages.